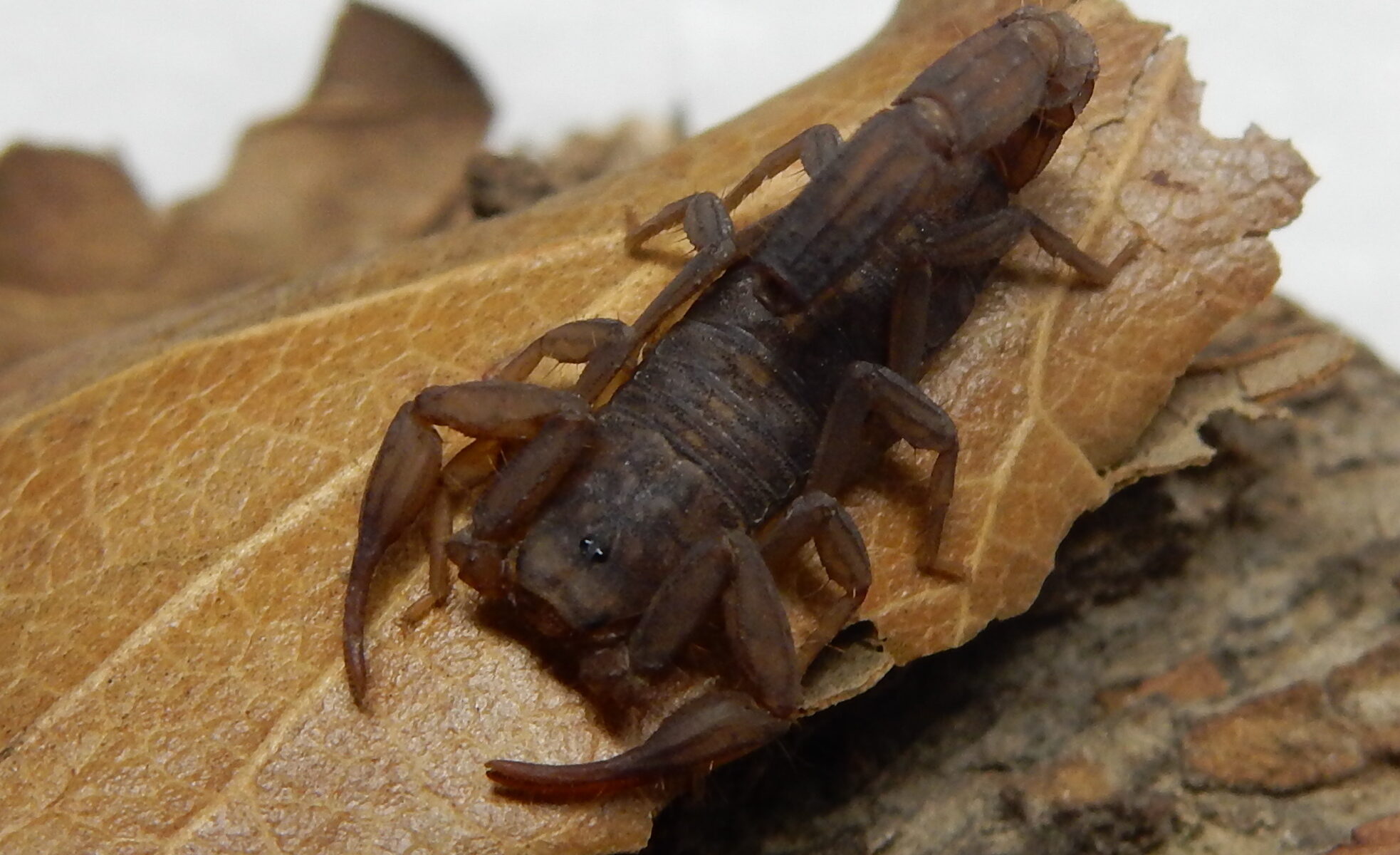 Last November I made a trip to south-eastern Arizona, specifically the Dragoon and Chiricahua Mountains, for the express purpose of finding invertebrates. Granted the timing was not fantastic and I had only about two full days of time to explore, but I was expectant of finding cool invertebrates nonetheless after the success of Michael Jacobi and Co. in the fall of 2019. While I did not find any Aphonopelma or Scolopendra heroes, I did discover one other reason why Arizona continues to draw invertebrate enthusiasts from around the world: the scorpions.

To be clear Arizona does not possess the incredible Kovarikia or Cataliniae my home state of California has, and so therefore one can only be so impressed (;D). But I will say that finding scorpions in Arizona in fall/winter is a lot easier to do than in California; all told I found 11 specimens in roughly two days of haphazard searching spread across 4 locales of 5 species. Comparing that to the fact that I have only ever seen 2-3 Superstionia donensis, Paravaejovis puritanus and confusum, and Smeringurus vachoni in California in the fall/winter after several years of searching, that is pretty good.
Anyway, one of these species I found in Arizona was Vaejovis electrum from Mt. Graham in the Pinaleño Mountains, a very unique vaejovid species that was only described in 2011. It lives under rocks in the forests at higher elevations (8000-9000+ feet) along the mountain side. My adventure in finding them was relatively typical; I arrived near the type locality and started flipping rocks, ha ha. They are decently common, as within the space of an hour I found five specimens, all within a relatively small area, though I only managed to catch four, the first escaping as I tried to photograph it in-situ. This species seemed to favor rocks (themselves often covered in lichens) that were set fairly deep into the ground near the roots of trees, though this could just be a sampling bias as for some reason most of the rocks were near the pine trees that dominate the forests at this altitude on Mt. Graham (or vice versa). It was interesting to note that this species does not seem to be communal, as specimens were only ever found individually, unlike, say, Vaejovis carolinianus which is often found in loose aggregations under the same log or board. I did only seem to find adults or large juveniles, which could have been due to the time of year, as I imagine in the wild this species does not breed like it would in the spring or summer when food is plentiful, though this is just speculation on my part.

I was disappointed to learn that “electrum” did not refer to the electric-appearance of this species, ha ha, rather meaning “amber” in Latin and referring to their amber coloration. I personally don’t really see much amber in my specimens, but it is apparently quite a variable species in terms of coloration, and on top of this I am red-green color deficient (partially color blind), which doesn’t help with seeing the subtle hues that so often comprise amber.

Anyway, after returning home with my prize I rehoused the specimens into 5.5 ounce deli cups on slightly-moist peat with some bark and oak leaves to hide under, essentially mirroring the habitat I found them in as much as I could (I did not have flat stones small enough for them, hence the bark). Unfortunately one of the smallest specimens died soon after this for reasons I am not fully sure of, leaving me with three scorpions. These seem pretty forgiving in terms of husbandry all the same, handling both dry and moist conditions well.

I don’t believe in collecting animals as trophies, and I collected these in the hopes of breeding them; three is not great for a breeding project, but there is still hope!

…At least, there was hope until I learned that the most reliable way to sex this species is through various measurements of the body (such as the width of the chelae), measured in millimeters, as noted in the original description of this species by Garret B. Hughes. Now, V. electrum is a very small, highly skittish species, so much so that even getting a pectinal tooth count, which is helpful for sexing other species, was going to be hard, so I highly doubt, even if I had such tiny calipers to take the necessary measurements on my specimens, I would be able to sex them (alive anyway). The count of the pectinal teeth can be helpful for V. electrum, as males have a mode count of 12 and females a mode count of 13, but that is a scarce difference with plenty of room for overlap and observer miscount (1).

Thus, I am not totally sure how to proceed. I do think I have three adult specimens, and I will try to count the pectines to at least get an idea of what the sex ratio might be, but otherwise it may come down to simply putting specimens together and keeping my tongs and tongue depressor handy. In the meantime I definitely plan on upgrading the three specimen’s enclosures to something bigger and more suited to an ecoscape similar to where I found them, and perhaps I will reach out to Richard F. Ayrey, who studied this species’s reproduction in his 2013 paper “Reproduction and Birth in the “Vorhiesi” Group of the Genus Vaejovis (Scorpiones: Vaejovidae). Part I. Clutch Size”, to see how he went about sexing the specimens he used for his study (2).

Anyway, it’s been an interesting experience finding this species in the wild, studying them in captivity, and learning about them further through the published literature. I definitely hope that a breeding project is still possible for my trio of specimens, and if so their good-sized clutch sizes definitely makes the further dissemination of this species to breeders a strong possibility (2). It seems, here in the USA anyway, that enthusiasts and breeders so often miss out on our own wonderful scorpion diversity amidst an emphasis on larger, perhaps more charismatic, exotic buthid species…even though electrum is way cooler of a name then bicolor.

Why not have both?

1. Hughes, G. B. (2011). Morphological analysis of montane scorpions of the genus Vaejovis (Scorpiones: Vaejovidae) in Arizona with revised diagnoses and description of a new species. The Journal of Arachnology, 39(3), 420–438. http://www.jstor.org/stable/23070789