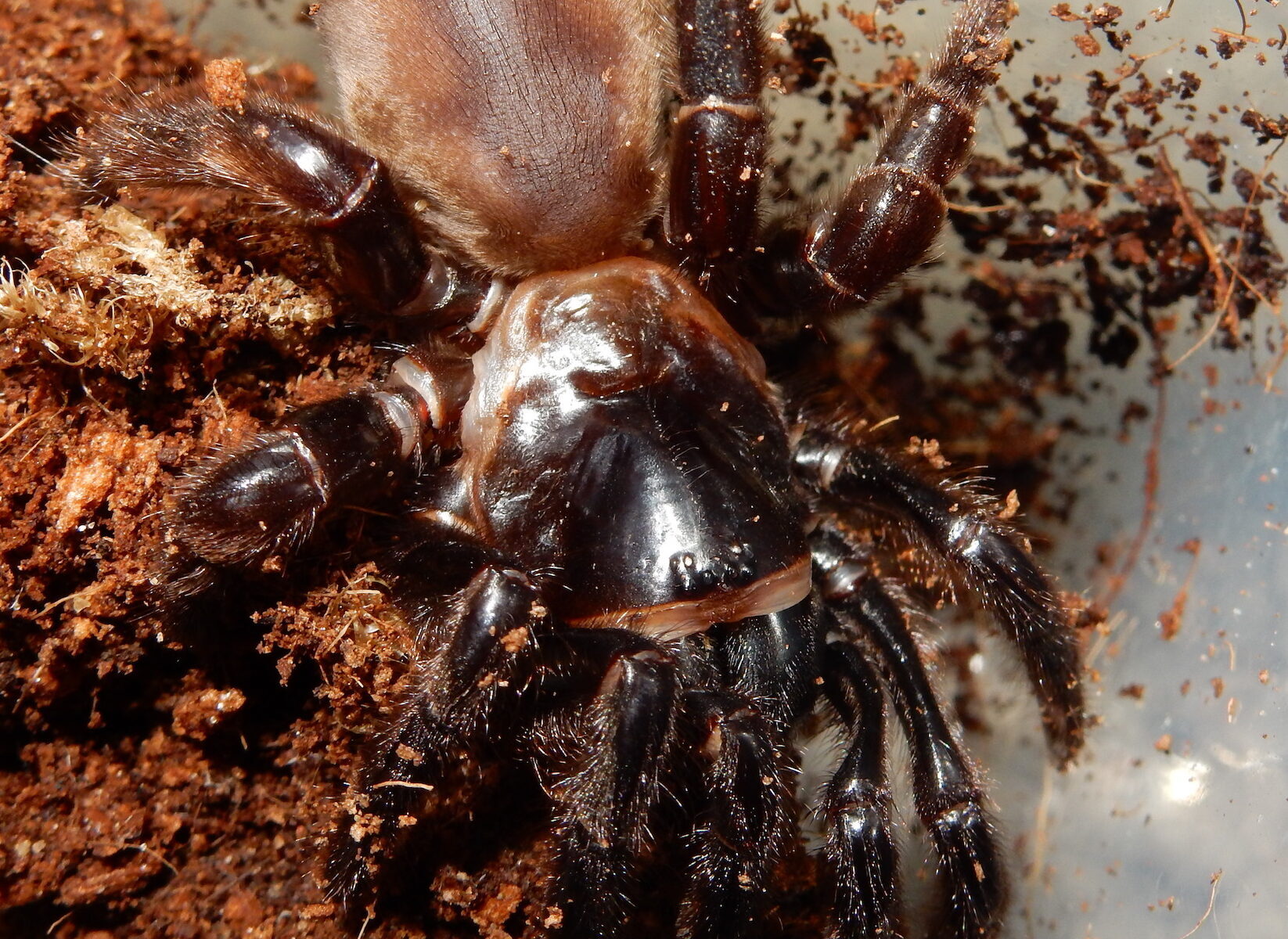 Back in 2019-2020 a small number of trapdoor spiders were imported from Madagascar into the USA and sold under the name Thyropoeus mirandus. They were enormous for trapdoor spiders, easily matching the largest American trapdoor spider species (Bothriocyrtum californicum) and dwarfing the majority of other species kept in captivity, including Liphistius. They by and large sold pretty quickly, and within a few months none were to be found available anywhere, except for perhaps, of course, Madagascar itself.

Madagascar is a biodiversity hotspot to put it mildly, being home to such hobbyist favorites as Zoosphaerium, Aphistogoniulus, Monocentropus lambertoni, and Calmanesia, and therefore it should come as no surprise that such an interesting trapdoor spider would come from the island. What is surprising is to what degree Madagascar is suffering both in terms of its human population and its ecosystem, with over 2 million people below the poverty line and little hope for self-improvement with 9 out of 10 children being illiterate according to the World Bank (1). These terrible statistics point to a likewise depressing point; in the Malagasy Central Highlands, 60% of wetlands and 30% of riparian forest has been lost in the face of subsistence farming and slash-and-burn agricultural practices; this is just the highlands, and this info is quite old already, being from 2013 (2). The situation is grim across Madagascar for both the wellbeing of the people and the wildlife that call it homes, and though things like lemurs and chameleons get a lot of conservation attention, other, less-noticeable species, are pushed to the edge; multiple species of Aphistogoniulus are now restricted to small patches of rapidly-disappearing forests (3).

If Aphistogoniulus and other such invertebrate species are largely missed in the broader conservation picture (most poignantly by hobbyists so often unfortunately) despite being quite “obvious” in terms of color and size, the situation is quite possibly worse for cryptic species…such as trapdoor spiders like Migidae sp.

Now you may be thinking, “Arthroverts, what’s the deal with Migidae? Sure it’s sad what’s happening in Madagascar but what’s the deal?” Well, the answer to that is I have one.

To be clear, I won’t buy these, or most any trapdoor spider, now, and the reason for this is that back in 2021 I was very fortunate to be able to attend the February meeting of the Invertebrate Club of Southern California, at which Dr. Jason E. Bond of UC Davis (of Cryptocteniza kawtak fame) came and dialogued with club members about the conservation and cultivation of various trapdoor spiders. One of the families that came up was Migidae, and Dr. Bond expressed his deep concern over the practice of collecting and selling such spiders given the situation in Madagascar. His words have stuck with me, and in the time since I have decided not to acquire any trapdoor spiders from Madagascar if it meant buying them. By that time it was largely a moot point as the stock of such spiders had dried up, but soon after that meeting with Dr. Bond a friend of mine put his specimen up for sale or trade, and incredibly, I was able to trade for his specimen on very favorable terms. Since my friend had purchased it from an importer and was now looking to part with it, my trading for it would not incentivize further wild collection of this species (as far as I am aware), hence why I felt it was ethical for me to acquire it.

Anyway, of course, since we are dealing with a trapdoor spider, I only saw it once in the entire time I had it, and that was an unclear view through plastic and webbing. Crickets disappeared irregularly, and while it sometimes appeared as if new webbing or burrowing had taken place, I couldn’t help but wondering if I was just seeing what I wanted to and not something that was actually there (c’est la vie for keepers of such mygalomorphs). It remained unseen for close to a year.

At least, up until a few days ago.

In repeated discussions with my friend RezonantVoid (whom I interviewed a little while back), and through personal observations in the field, I have come less and less to appreciate coco coir as substrate for non-tarantula mygalomorphs (and tarantulas to to an extent). The Migidae specimen was housed on coco coir, about 12″ of it with the burrow to prove it, and so I let it be for, gosh, come to think of it, it’s been almost a year now. However, my itch has always been to rehouse it onto something with more clay content for better burrow building, and having not seen the specimen in the entire period since I got it, I was beginning to wonder if it was still alive; fungus had also started to spread throughout the substrate, necessitating a change sooner rather than later. I carefully dumped the whole block of substrate held together by hyphae into another bin, and slowly started to dismantle it with my tongs. Before long I found tube of the main burrow, and saw a very suspicious wiggling in it…

Ta-da! I was immensely happy to see that that wiggling was of a healthy, if a little thin, trapdoor spider.

On a taxonomic side note, these spiders were sold as Thyropoeus mirandus, though various other enthusiasts and breeders have taken issue with this identification, some suggesting that they are idiopids, others another genus in the Migidae, and still others, including Dr. Bond, have just left the identification at Migidae sp. I have tried to look farther into identifying this particular specimen myself, with the most recent literature being an article from 2001 entitled “A Monograph of the Migid Trap Doors of Madagascar and Review of the World Genera (Araneae, Mygalomorphae, Migidae)”, by Charles E. Griswold and Joel Ledford, which was published in Occasional Papers of the California Academy of Sciences (4). I am still continuing to work through this article and comparing the diagrams to my specimen, and will update on what, if anything, I find out. Insofar my specimen seems to match Thyropoeus in terms of external characteristics (how I wish I had gotten better pictures of leg III now!), and considering Tom Patterson found the original ID of T. mirandus accurate that is probably what it is, but until confirmation I follow the friend I got this specimen from and Dr. Bond and leave the identification at Migidae. If anyone has insight on this please be sure to comment or contact me directly.

This specimen’s fangs make it look much larger than it actually is, and while it is not particularly fast, such powerful-looking jaws do make me nervous of ever getting my finger too close, ha ha. I was, and am, absolutely floored to have this specimen. It is ostensibly a female that is probably over five years in age (at least two years in captivity now, I estimate at least three in the wild to grow to this size); considering the slow growth of most trapdoors it is quite possibly closer to a decade old, which would be longer than I’ve been keeping invertebrates seriously.

The realization of dealing with something so old has made me completely reorientate how I view keeping trapdoors and threatened mygalomorphs in general, and I strongly believe, after talking with Dr. Bond, seeing the danger to Madagascan wildlife, and finding trapdoors here in my home state of California, that such spiders should not be kept in captivity for any purpose other than life history studies or captive breeding. That’s a pretty narrow view I know, but I can’t help but feel that the removal of such amazing creatures from their native habitats, which, as far as we can be aware, was not because it was about to be destroyed given most wholesale collectors situations (in which case collecting would be justified), for the sole purpose of sitting in a jar of dirt on the shelf of someone’s collection as a trophy pet is hardly a responsible “use” of the creatures we are charged to protect. And I know I’m generalizing, and I am indicting myself in saying this because for many years I did the same thing, but I feel it is a necessary indictment of a hobby that has, by and large, ignored the wider picture in a search for the next cool species, and in doing so incentivized bad collecting methodologies and further exacerbated conservation crises the world over. There are bright spots; Simandoa conserfariam, the Mexican tarantula breeding project headed up by Dr. Jorge Mendoza, Cubaris sp. “Blonde Ducky”. But crucially, all of these projects have been reactive; reactive to the fact that the bauxite mine that destroyed the habitat of S. conserfariam was going in, and reactive to the rampant overcollection of Brachypelma and Tlitocatl to support the demand coming from us enthusiasts; in the case of C. sp. “Blonde Ducky” I think it was largely luck that specimens were collected prior to the destruction of their cave by another mine (from what I understand).

Being reactive means we are beaten to the punch; we lose our opportunity to do good for goodness’s sake because, for whatever reason, we are distracted elsewhere, and there are only so many Jorge Mendoza’s and Piotr Nasckrecki’s who can be in the right place at the right time to pull things back from the edge. I want to call us all to step into being proactive, and that means making sure we don’t incentivize the collection of threatened species in the wild, or irresponsible collection with regards to any species anywhere really. And when species like Migidae sp. “Madagascar” come in, we work together to make sure that they aren’t lost in a whirlpool of trophy-pet keeping and indiscriminate collection. Again, in this regard I am not someone to be praised; I had a general idea of what I just shared above, but did not attempt to seriously try and form a team to try and breed them, if that were even possible (the majority of the imported specimens are mature females I believe due to their size). And it is also possible that there is some enthusiast somewhere already doing yeoman’s work in trying to breed these and document their life history that I don’t know about. But regardless of either, the point remains, and for Madagascar’s sake, and truly the sake of ecosystems the world over, we need to get our act together and change this “hobby” from merely being a reactive one that in many ways supports bad ecological practices into a force for good. The world is bigger than our enclosures, and we need to start seeing it that way.

What does this mean for my specimen? I hope to keep it until it dies of old age, and then I will preserve it for further analysis. If before then I can find other people with this species, aside from being over the moon, I will most happily see if a breeding project can be undertaken. But aside from these, I hope it will help us visualize that we can both do great and terrible things for the natural world, and it’s about time we as invertebrate enthusiasts and breeders started to do more good, both for Madagascar’s sake and the rest of the world.