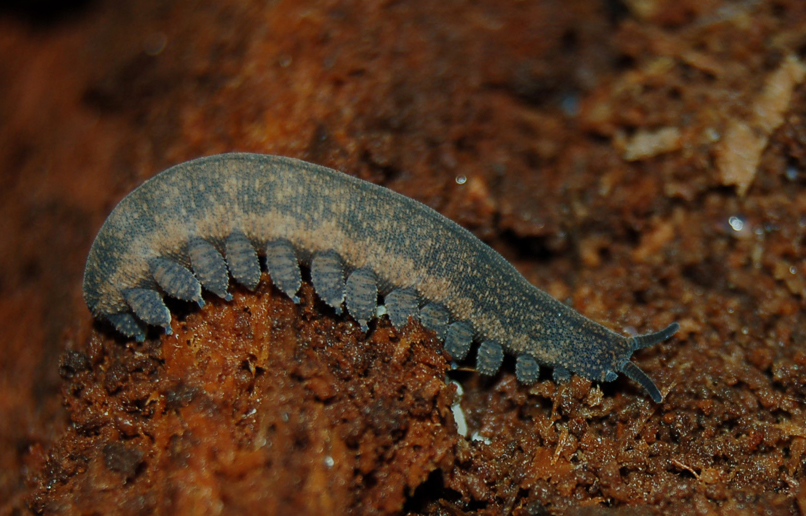 Hello all, one of the interesting things about my blog is that about 90% of the traffic to it, and more than that of comments, are coming for my posts on velvet worms, specifically the Epiperipatus barbadensis I helped import to the US. This is great, but today I want to talk about another species of velvet worm from New Zealand in need of some help.

Recently I attended the 2022 Myriapod Meet-Up hosted by Paul Marek and the Marek Lab of Virginia Tech University. This was essentially a mini-conference on the subject of myriapods (centipedes, millipedes, pauropods, symphalans, and the honorary myriapods, onychophorans, or velvet worms), bringing together about 70-80 professionals from all six inhabited continents(!) to present on and discuss various discoveries in the field, and dialogue on taxonomic and conservation issues. Unfortunately, while I missed the first two hours of the conference due to forgetting the time zone change (when someone in Virginia says 8:00 AM they mean 5:00 for the West Coast…), the rest of the time I was able to listen in as such giants of the field as Sergei Golovatch, Thomas Wesener, Paul Marek, Jackson Means, Carlos Martinez, Petra Sierwald, Sam McNally, Pavel Stoev, Peter Decker, and many others discussed all manner of subjects relating to myriapods. I learned a lot, made some good contacts, and it was a true pleasure to see how international and diverse in every which way the study of Myriapoda is.

But all this aside, one of the last presentations was made by David Randle, a conservationist from New Zealand who has been working in the city of Dunedin on the south island for over 40 years. As he related during the meet-up and afterwards in private conversations, he discovered a species of velvet worm in his back yard in 1990 that is believed to belong to not just a new species, but a new genus entirely by several onychophorologists including Dr. Hilke Ruhberg. Unfortunately, for various reasons, a proper description of the species, which would have to be included in a larger revision of New Zealand velvet worms, has not yet been undertaken, so this species remains under the common name Caversham Valley Peripatus.

Now, New Zealand velvet worms have often appealed to enthusiasts such as myself due to their incredible coloration, and this species from Dunedin is no exception!

Two of the incredible things about this species is that it is capable of colonizing disturbed areas near human habitation and roads, surviving and thriving even under rotting logs of introduced tree species, and that it is found in enormous densities in good habitat. Dave mentioned that when the New Zealand Transport Authority (NZTA) widened the Southern Scenic Route, shown below on the map, he removed over 10,000 specimens from the 40 meter (130 feet) strip of land alongside the road where the expansion would take place, and when he first discovered the species in his yard in 1990, he found a colony of over 2,000 specimens living under a brick pile! This is a far cry from the single-digit number of specimens so often found in Asia and South America even by experienced field researchers, and is a testament to the prolificness of this species. I can only imagine the population density of this species in a single hectare of quality habitat (old growth forest with lots of rotting logs from native tree species such as tree fuchsia, Fuchsia
excorticata, broadleaf, Griselinia littoralis, blue gum eucalyptus, and a thick layer of leaf litter).

On the subject of land, if one looks at a map of the Dunedin area, it is easy to see that almost the entire area has been developed, which naturally raises the question of where these velvet worms live in such a region, and unfortunately the facts of that part of the story are much grimmer. Near Dave’s house remains one of the last patches of old growth forest in Dunedin, and it is here that the Caversham Valley Peripatus cling to life. Originally 10 hectares (24.7 acres), the area has since been reduced to six (14.8 acres) by continued development, and is threatened to be shrunk even smaller by plans for a new sub-division right over the best habitat in those six hectares. Dave currently manages two hectares (4.9 acres) in the affected area, but it is obvious that if the available habitat is reduced from such a small area to that even smaller one, the probability of ecological and population collapse only grows.

Thankfully, velvet worms seem to be pretty resistant to genetic depression as shown through the continued viability of captive Epiperipatus barbadensis populations after four years, 5-10 generations, and thousands of specimens, all of which come from a starting population of about 30 individuals. However, for wild populations this is obviously not a preferable situation, and other creatures, such as a species of skink only found in the forest and grasslands of the area, will be wiped out due to habitat loss and population collapse if the sub-division is put in.
Old growth forest, which is what is being threatened in Dunedin, has proven to be important to not only invertebrate fauna but all sorts of other creatures, whether in the USA, Madagascar, or in this case New Zealand, and it is hugely disappointing that it is not appreciated even though such forests are incredibly valuable parts of ecological heritage. This was made even more poignant when Dave noted that the council of Dunedin is breaking New Zealand conservation laws and a conservation plan that was put into place by the prior council in order to get the sub-division built. A contract was signed by the current council with a construction company already, and since financial law is so often placed above conservation law, getting the contract overturned and the development stopped involves going to a High Court in New Zealand, which costs around $40,000 USD (the enforcers of the law are the ones breaking it in this situation). Discouraginly, this is something out of reach of the majority of conservationists, who are so often unfortunately one-man armies.

All this was related during the Myriapod Meet-Up, and Dave’s impassioned call for help really resonated me; he has been working to protect this area for 40 years and the velvet worms inside it for over 20, and his love for the environment and the animals directly speaks to my my Christian faith of properly stewarding the natural world. I also have a similar, if not quite as urgent situation, here in my home region of Southern California and more specifically the Mojave Desert, which has seen rapid development since the 1990s. Year after year I have watched as quite literally parts of my childhood are fenced off, graded with bulldozers, and destroyed, with armies of houses, warehouses, and shopping centers replacing priorly pristine desert. I recently discovered a rare species of tenebrionid in the genus Schizillus in an area that will probably all be houses in the next ten or so years; the memory of creatures like Aptostichus lucerne, and the possibility of there being other species like it that we will never know about, continues to bother me. I have even seen such iconic species as Joshua Trees, Yucca brevifolia, be illegally chainsawed and left to rot ahead of planned development.

Those who have not had emotional connections to parts of the natural world will not understand so easily the pain of what it’s like to see it destroyed, and so it is understandable why, by and large, the plight of the Caversham Valley Peripatus remains unknown in recent times in the midst of various other tragedies.
Even for conservationists in general, who have seen this cycle repeat itself over and again, it becomes hard to have empathy when it seems like there are so few victories over which to rejoice. And I feel that’s not only sad, but dangerous, as losing empathy before the work is finished desensitizes us to these struggles, and keeps up from really investing in the work. This desensitization almost is something I have had to guard myself against with regards to human disasters, and am now realizing that it is also something I need to guard against in relation to the natural world as well. I want to approach each of these situations, whether human or natural, as an opportunity to show the content of my character and grit of my spirit, and I hope those who care about these issues also resolve to do the same.
But that may be too grand to say for now, and in any case I am here to talk about velvet worms.

What can be done to help the Caversham Valley Peripatus/velvet worms/onychophorans, even in the midst of this seemingly hopeless situation?
First off, spread the word. If I could I would fly to New Zealand to show support to Dave in person, but barring that I want to encourage anyone reading this to share this with other invertebrate enthusiasts you may know. This also effects a species of skink that Dave mentioned is only found in the area that is being developed, so share it with reptile enthusiasts too if you know of any who would be interested. I am just one blogger in a corner of the internet, but together we can make a difference for good, and as the news spreads to others it will invariably become harder for the destruction of these velvet worms to be snuck by. It is only in silence that such things can happen; Edmund Burke said, “The only thing necessary for the triumph of evil is for good men to do nothing,” and this is true for abuses against both humanity and nature.

Second, reach out to Dave and let him know you care about his efforts. As I noted above, it can be discouraging when one is seemingly the only person fighting to protect a species or area, and by making connections between all us one-man armies we can encourage and strengthen each other, bearing one another’s troubles so to speak. I know the community of professional myriapod researchers is now aware of this issue, and if amateurs can come together with them to support Dave and his work to save these velvet worms, skinks, and their habitat that would be amazing.

You can reach Dave by email at dhrandle30 @ gmail.com, and again I encourage everyone to pass the information along to others. If you want to help in a way besides the two I list here, please send an email to Dave, as he is familiar with the situation and the velvet worms themselves.
Please do not message him to ask about acquiring specimens for personal collections or to ask about care information; while I am sure many of us would love to breed these velvet worms in captivity, the bigger concern here is making sure they are not lost from their native habitat, which is obviously the best place for them to be, and captive breeding programs would be a last-ditch effort for New Zealand conservationists and enthusiasts to attend to.

If you would like to learn more about these velvet worms and the current situation in New Zealand, please email me (see bottom of page), and I can send along some more photographs and documents that Dave has shared with me. There are so many more interesting aspects of these velvet worms I haven’t been able to fit in here, and even now I am stirred to go see them myself! If only international travel were a little easier in these days…

I hold onto the hope that through the raising of awareness, the sharing of information, and bringing together of many who care about these things, the Caversham Valley Peripatus can be saved.

“For we know that the whole of creation groans and travails together until now.”