Hello Everyone! I have had quite a bit happen in my collection over the past couple months, including new stuff! Anyway, lets jump right in. I finally got some good pictures of my Tapinauchenius sp. “Colombia”.

Turns out he was molting, so thats why I didn’t see him for a while. The yellow on his abdomen is much brighter in real life.

My Tapinauchenius violaceus has molted, and I caught a picture of him doing yoga after the molt! (Ha Ha)

He’s around the two inch mark now. (all references to “he” or “she” are assumptions for ease of writing unless otherwise stated)

Some weird fungi has grown in some of my enclosures, such as the long, elongate mushrooms I found in my Grammostola porteri’s enclosure. (sorry about the blurriness, I am having trouble with the aperture on the camera). 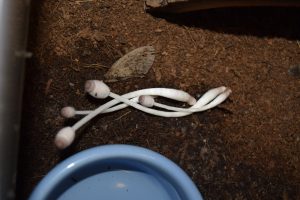 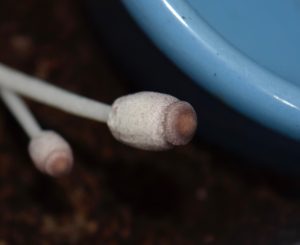 Moving on, I have found quite a few cool invertebrates around my neighborhood. Here is a picture of some sort of fly…..

Some species of shield bug (I think)….

A large moth that was hanging out around our porch light….

And this cool Praying Mantis that I found at my Grand Parents house….

And now for the new stuff!

I just got six Centruroides hentzi as an early birthday present, of which one was dead when I got it, I just didn’t notice it, and another which had two scorplings but died after a few days in my care (sadly, the scorplings died a little later too), and another which died after about two weeks for almost no reason I can think of. Anyway, the other three look O.K., thank God. They are in a gallon jar in a communal setup. I am getting another C. hentzi as a refund since the one was dead when I got it, and I am going to buy another since the mother one died as well. Anyway, I hope I can get a breeding colony going soon. Pictures coming soon!

I also purchased a Huntsmans spider, a Heteropoda insubtilis (or is it Holoconia insubtilis? Who knows?)! At roughly an inch in legspan fully stretched out, he is still rather small, but boy, is he fast! I dropped a pinhead cricket in, and I couldn’t tell if he nailed it before or after it hit the ground. Crazy fast.

My grandfather also got himself a Scolopendra subsinipes subsinipes, or Giant Vietnamese Centipede. I am taking care of it for him, so that’s cool. He is in his new jar, so I’ll try and get some pictures of him there soon.

I caught this mantis (I think its a California Praying Mantis, Stagmomantis californica) in Sacramento, it was hanging out on my brother’s leg! (It has been such a long time since I’ve posted that this mantis has actually passed away)

I have a few other new animals to share with you at the next update, so until then, see ya!